In March, I reported on the ominous trend in the countries with the largest experimental COVID-19 vaccine rollouts.

With the exception of a couple of outliers, every country with mass vaccine rollouts experienced a dramatic spike in COVID-19 cases and deaths.

Israel, United Kingdom, Chile, Hungary, and Serbia were among the notable examples of this trend.

Fortunately, Dr. Gérard Delépine has collected brilliant research of the pre and post experimental COVID-19 vaccine trends in countries from various regions around the world.

Two months ago, we tried to alert people to the paradoxical results of the covid19 vaccines by publishing the pre- and post-vaccination mortality curves for Israel and Great Britain [1] which already showed that these vaccinations were followed by ‘a considerable increase in contamination and mortality lasting 6 to 8 weeks after the start of vaccination. [2]

Since this period, vaccination campaigns have spread worldwide even to countries where covid was not present. And everywhere they have been followed by a dramatic rise in new infections and mortality for several weeks or months. [3]

How many deaths and severe accidents will it take for executives, WHO, health agencies FDA, EMA among others, to look at the proven results of this experimental pseudo-vaccination in the real world and derive the results from it? consequences ?

Let’s dive into the research.

How about Nepal, which is currently suffering from one of the most severe COVID-19 outbreaks at the moment?

In Nepal, a country of 28 million inhabitants

The vaccination campaign, using the Chinese vaccine and the Indian Astra Zeneca, began at the end of January 2021. So far, after ten months of the epidemic, the country had 270,092 confirmed cases and 2017 deaths and the daily average of new cases s ‘amounted to 350.

Before their vaccine rollout, Thailand only reported 83 COVID-19 deaths over a 1-year span. Moving to South America, Colombia was turning the corner earlier in 2021.

But then the vaccine rollout began.

In Colombia , a country of 50 million inhabitants

country severely affected by the disease, the epidemic began to decline sharply until the start of the vaccination campaign on February 18, 2021.

Since then, the number of daily infections has quadrupled and daily mortality has multiplied by 3 Brazil, #2 in total COVID-19 deaths around the world, witnessed a spike in deaths following its vaccine campaign. 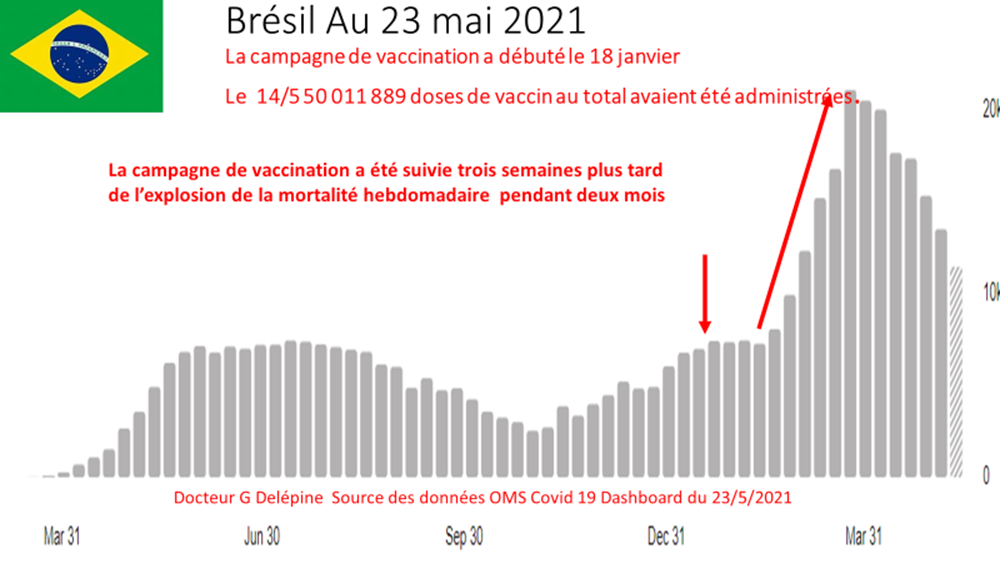 The small Middle East country of Kuwait also saw a sharp rise in cases & deaths following the start of the vaccine campaign. 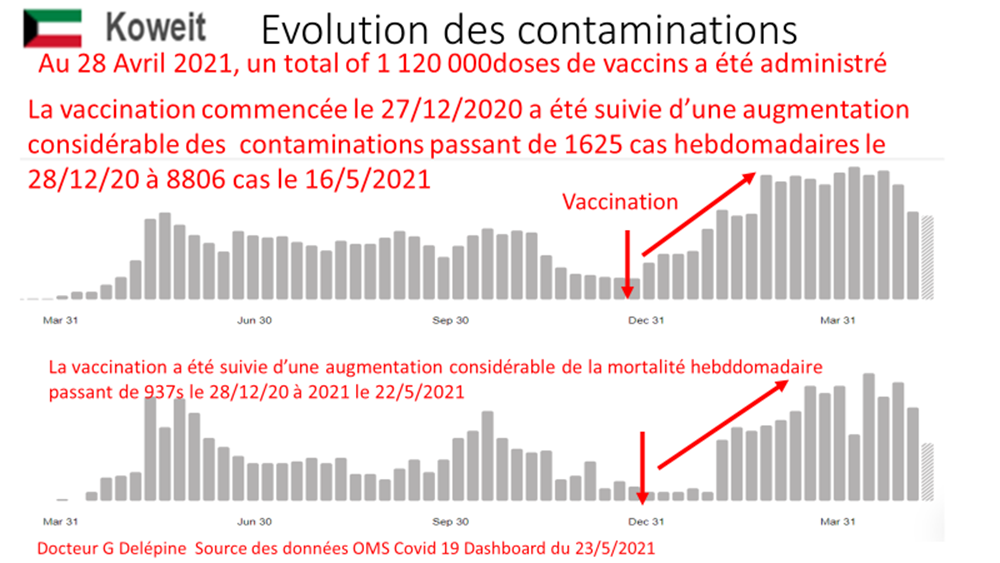 In the tiny European nations of Gibraltar and Monaco, COVID-19 was virtually non-existent until their vaccine campaigns. 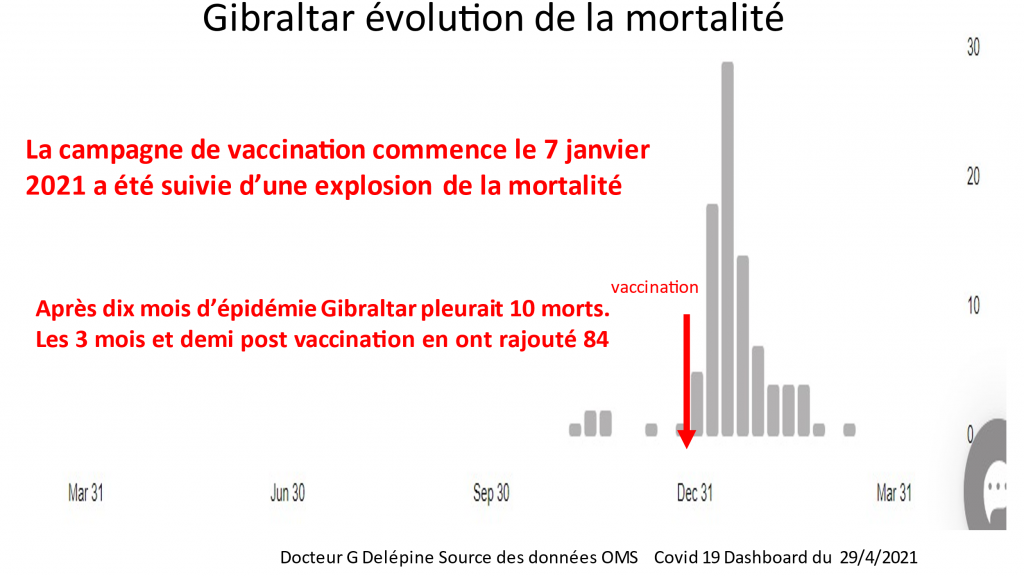 (All images sourced from Global Research)

Vaccination advocates claim vaccinations in Israel and Britain have been successful, as current, daily contaminations and mortality are low.

But these apparent successes correspond in fact to the disappearance of a large part of the people at risk (the “harvesting  ”) achieved by vaccination and to the spontaneous regression of the disease observed also in countries with little vaccination.

In these two countries, the mortality attributed to Covid increased sharply for 4 to 6 weeks, equaling all the deaths in 2020. The covid per vaccination mortality curve in Israel is demonstrative.

The “harvest” of 1,404 people in January and 949 others in February, the equivalent of a full year of Covid mortality without a vaccine (the year 2020) sharply reduced the number of Israelis at risk, resulting in de facto probably a decrease in the apparent risk of mortality in the coming year, in this age group.

But along with this decrease in its original target, the virus has mutated to attack other segments of society and especially younger age groups.

In November 2020, data from the Israeli Ministry of Health revealed that Israel had detected 400 cases of the coronavirus in children under the age of two. In February 2021, that number increased to 5,800.

The same “harvesting  ” has been observed in Great Britain. As the Covid19 threatens only a small part of the population (the elderly with comorbidity), the peri-vaccination disappearance of a large part of this population (as much as the deaths of the year 2020) at risk, mathematically reduces mortality observed, at least transiently.

Since the British vaccination campaign, the average mortality per million inhabitants in Great Britain (934 / M) is more than double that of the Netherlands (411 / M).

The natural regression of the epidemic

Also explains the drop in mortality as shown in the comparison between the highly vaccinated Great Britain and the very poorly vaccinated Netherlands.

The mortality curves per million inhabitants follow the same temporality in these two neighboring countries. That of the United Kingdom suffers from a much higher peri-vaccination peak, the current mortality in the Netherlands is slightly higher reflecting the absence of the English “harvest”.

The current vaccination, accelerator of the epidemic and mortality?

The review of the main countries which have adopted broad vaccination shows that in real populations, generalized vaccination behaves more as an accelerator of the epidemic and of mortality than as a prevention thereof. [5]

In all highly vaccinated countries, the mortality recorded during the two months after vaccination is equal to or exceeds that of the whole of 2020.

The tests of these vaccines were insufficient, without hindsight, because they are in progress. The first results are promised for early 2023.

None of them pointed out the possibility of a possible increase in contamination and mortality, which fortunately appear to be transitory. They are not very informative on the more or less serious side effects, such as the frequency of early vascular accidents in the days following vaccination, or the multiplication of miscarriages and menstrual disorders in women for example and of course the possible more complications. late in the medium and long term.

The race for accelerated vaccination at all costs could ultimately be ineffective for popular confidence in all vaccinations. There’s no point in running, you have to start on time, La Fontaine would have said. But new billionaires like the CEO of Moderna probably don’t think like the turtle in the Fable who has already amassed a fortune.

THE FUTURE IS EARLY TREATMENTS MASTERED BY FIELD PHYSICIANS

Transparent studies are essential to understand the mechanism of these transient worsening of the epidemic after vaccination and to deduce possible preventive measures, if a new outbreak occurs.

Especially since the future, after this vaccine hecatomb, remains very uncertain. The leaders who have violated the bases of medicine and democracy by imposing express vaccination without respecting the usual procedures for the safety and effectiveness of drugs placed on the market, all find themselves promising their populations early treatment for future waves, thus proving, like Boris Johnson, that they no longer believe in the vaccination they have imposed. [6]